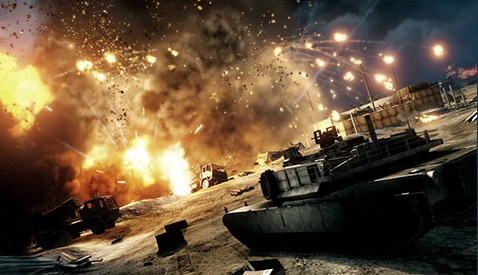 With Battlefield 3 Premium membership, you get a digital service which includes all five themed expansion packs for Battlefield 3 including Back to Karkand and Close Quarters, as well as early access to Armored Kill, Aftermath and End Game. Together these five digital expansion packs deliver a ton of new content, including 20 new maps, new weapons, more than 10 new vehicles, and four new game modes. You also get exclusive in-game items not available anywhere else, including the ACB-90 knife, a set of dog tags, and exclusive soldier and weapon camos. Plus, your membership lets you access powerful new features such as the ability to reset stats, queue priority into servers, and new decals for Platoon emblems.

You can also get a jump on the competition online with theMultiplayer Head Start Kit. The kit gives you immediate access to such powerful items as heat-seeking AA missiles for jets and helicopters, special gadgets such as the defibrillator, and T-UGS sensor, and weapons like the 40MM grenade launcher, M416 rifle, and M249 light machine gun. With 18 weapons, gadgets, and vehicle upgrades in all, the Multiplayer Head Start Kit is the edge you need to start dominating in online warfare.

• Engage in all-out warfare with award-winning multiplayer, intense co-op, and thrilling single-player missions.
• Ultimate vehicle warfare returns with Battlefield’s signature vehicle warfare experience, including damaged vehicles that can retreat or be defended until they automatically regain armor.
• A whole new level of destruction awaits as Frostbite 2 lets you chip away at cover, blow holes in walls, deform the terrain, and bring down entire building facades on enemies.
• Get a head start online with 15 advanced weapons plus gadgets, vehicle upgrades, and more.
• Never go into battle alone thanks to the powerful new community and social features of Battlelog.
• Get all 5 expansion packs including 20 new maps, 20 new weapons, 10 new vehicles, and 4 new game modes.