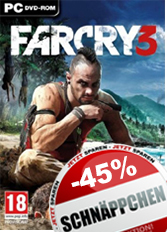 Get even more insanity by upgrading your game to the Deluxe Edition with the Far Cry 3 Deluxe Bundle. Includes six single-player missions, four rare animals to hunt, a bow and flare gun for multiplayer, and all other previously released retail bonuses in The Monkey Business Pack, The Lost Expeditions, The Warrior Pack, and The Predator Pack. Also included in this bundle: the game’s soundtrack and the Survival Guide art book (both delivered in digital format).