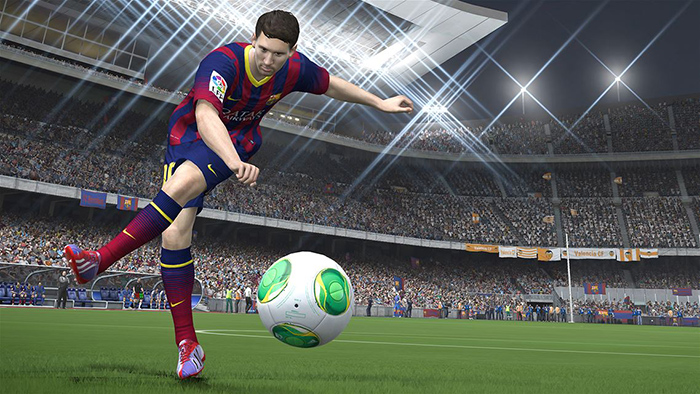 Experience the emotion of scoring great goals in FIFA 14. The game plays the way great soccer matches are contested, with innovations to the award-winning gameplay that inspire fans to build play through midfield, dictating the tempo of a match. Feel the tension as chances are created, and experience the thrill of hitting the back of the net. A new feature called Pure Shot and a brand-new ball physics system will transform shooting, making every shot attempt feel real, and when players connect with the perfect strike, feel exhilarating. FIFA 14 delivers engaging online features and live services that connect fans to the heartbeat of the sport - and to each other - through EA SPORTS Football Club. FIFA 14 is soccer's social network, where fans connect, compete and share with millions of others around the world.

Shooting has been transformed. Players have the intelligence to adjust their stride and approach angle to find the best position for hitting the back of the net. Well-hit balls feel satisfying and goals are rewarding. As well as quality strikes, players can now shoot while off balance or rushed.

Strike the ball with more force and finesse. Realistic ball physics now determines the trajectories of balls in game, enabling players to strike the ball with force from distance, drill low rising shots with accuracy, and blast dipping or swerving shots, just like real soccer players.

Better decision-making delivers tighter, smarter marking and improved run tracking. Defenders recognize opportunities to provide support and win back possession. Attacking players have new ways to outsmart their opponents and break down tighter, more intelligent defences by creating space for themselves, running along the backline and checking their pace.

Utilize quick, explosive cuts and turns to beat defenders one-on-one while sprinting with the ball. Players can move in any direction, preserving their natural momentum and maintaining possession of the ball.

The First Touch Control of dribbling varies a player's touch when dribbling with pace. Skilled players have the touch and control to stand out while less skilled players will experience fewer perfect touches and more uncertainty dribbling, creating opportunities for defenders to win back possession, and placing emphasis on building play through midfield.

The tackling zone has been extended to enable defenders to combine different types of tackles, recover from missed tackles quickly, and have a second chance to compete for the ball in any tackling situation.

Players have the ability to curl the ball around opponents to deliver precision passes to teammates or send the ball into space.

A competitive practice mode that enable players to learn or master the fundamental skills necessary to compete at FIFA 14. Become a better player, faster, no matter what your skill level, competing against yourself or friends in all-new mini-games.

Search for talent year-round with the new Global Scouting Network that brings the world of professional scouting to life. Develop and refine your own scouting network. Evaluate soccer players to uncover the attributes of players who could bolster your squad during the transfer windows. A new hub delivers easy navigation, fewer interruptions and live scouting reports.

Redeem prepaid codes on your console

Sign in to Xbox Live using the account for which you want to use the prepaid code.

Redeem prepaid codes on a computer

You can redeem all types of prepaid codes on a computer, including Xbox gift cards, Xbox Live gold cards, and Xbox Music Pass cards, and have them applied to your account immediately. Here’s how: