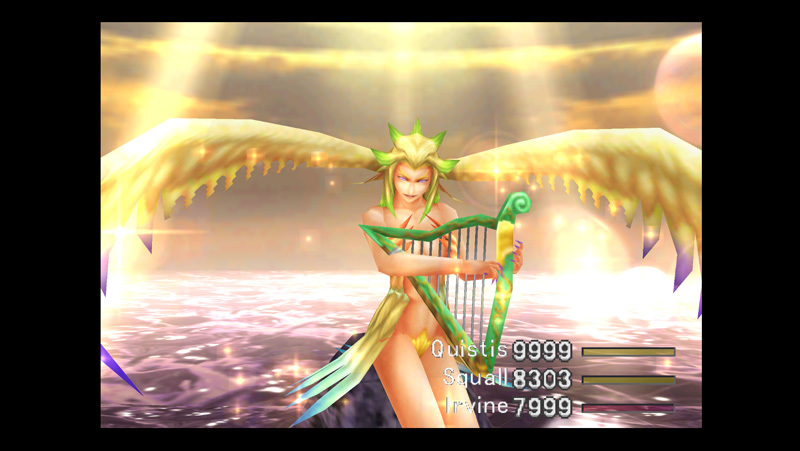 
ABOUT THE GAME It is a time of war. Galbadia, a Global Superpower, has declared war on Dollet, a country whose training academy is home to two personalities: the hot-headed Seifer and the 'lone wolf', Squall Leonhart. Both are equally at conflict with each other as their country is with Galbadia; to others, Squall appears lacking in team spirit, while Seifer lacks the discipline of his rival. However, a chance encounter with the free-spirited Rinoa Heartilly turns Squall's universe upside down; having thrived on discipline, Squall find the carefree Rinoa fascinating. He also begins to dream that he is Laguna Loire, a Galbadian army soldier?

Meanwhile, a sorceress manipulates the most powerful men in Galbadia.

Will Squall and his party succeed in defeating this maniacal sorceress and saving their world?

What part does the mysterious Laguna play? Only you can decide what happens next, as the greatest Role Playing Adventure of all time returns..

This feature can be used from the launcher.

This version of FFVIII includes the full game ?Chocobo Worldﾝ that was released as a separate application for previous versions. It is possible to play ?Chocobo Worldﾝ directly from the launcher after booting up FFVIII and by fulfilling certain specific conditions in the main game you will also be able to synchronise data between the two games.


NEW GAME BOOSTERS High Speed Mode
All scenes (including cutscenes, movies and battles, etc.) can be fast-forwarded. (Fast-forward speeds vary by cutscene, but average about five times normal speed.)
* CAUTION, certain computers may not be able to process the game with High Speed Mode. If the game crashes while in High Speed Mode, please restart the game and refrain from using High Speed Mode.

AP MAX
Sets level and AP of all acquired G.F. to max when used on the world map.
*May not function properly when used during event cutscenes.
*These commands can only be executed via keyboard.

Magic and Gil MAX
Sets inventory of each acquired magic spell to 100 and sets gil to maximum limit
*Cannot be used on menu screens, during cutscenes, in combat or at shop. Usable when moving between areas while playing Laguna's Dream.
*These commands can only be executed via keyboard.