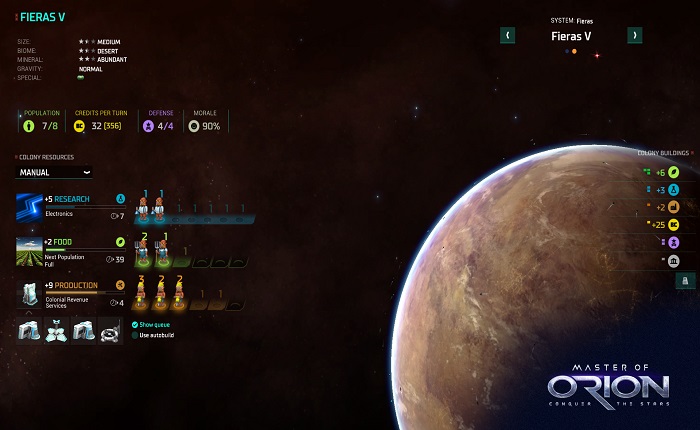 The ascendant spacefaring 4X strategy game returns! A new chapter in the epic Master of Orion saga is poised to once again capture the imaginations of millions of gamers.

Diehard fans of the first games will be ecstatic to know that this revival is being built under the watchful eyes of members from the original development team, in conjunction with NGD Studios in Buenos Aires!

Discover Master of Orion as it was always meant to be: A fully orchestrated score, interstellar warfare and exploration against the backdrop of beautifully animated far flung galaxies. Confront hostile civilizations, negotiate with mysterious aliens, share knowledge with allies and uncover this newly imagined universe.

Over 75 researchable technological advancements. Vast galaxies featuring up to a 100 different solar systems, each composed of myriad planets and stars. Customizable ships with diverse styles for each race. Multiple ways to win – including conquest, technological, diplomatic, and more. Enthralling gameplay that will have you saying “just one more turn” again and again.

Plus, when you get the Complete Collection, you'll get all three legendary original games – Master of Orion 1, 2, and 3. Also, you'll get an artbook with over 300 pages of art from the game. Music from the game will come with it too, as well as the literal scores for the game so you can play the legendary soundtracks yourself.

Not only that, you'll be able to play as the Terran race for the first time! These militant humans will give you a new way to play, thus giving you a brand new experience, and it's only available through the Master Of Orion Complete Collection!

So put your strategy skills to the test and see whether you can master your enemies and the stars.