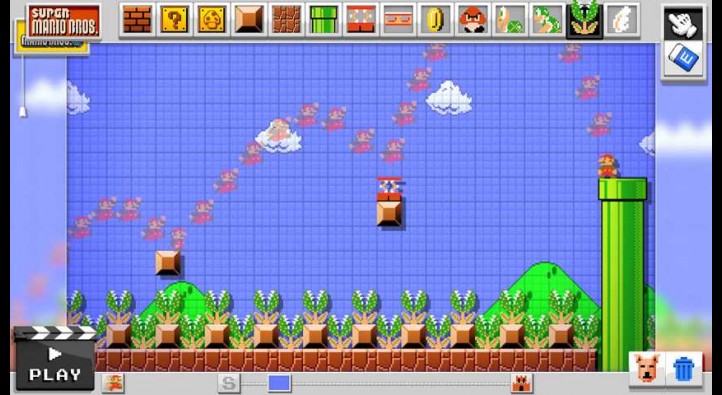 Earn in-game medals in 100 built-in courses and access recommended courses from the Super Mario Maker™ game on the Wii U™ console*. Plus, design courses and share them with other players via the StreetPass™ feature and local wireless**!

Want your cannons to shoot coins? Go for it! In this game, you call the shots, and simple touch-screen controls and interactive tutorials make designing courses a snap. Learn design tips and tricks from Mary O. and Yamamura, then share your masterpieces via the StreetPass™ feature and local wireless. Collaborating has never been easier now that you can share incomplete courses with other players. Finish off a course together and a special icon will commemorate the collaboration. That's one of many reasons that this is the must-play portable Mario™ game for inventive groups of friends and anyone yearning for never-ending Super Mario™ magic.

Take on 100 built-in courses as you tackle the Super Mario Challenge.

Create the Super Mario™ courses of your dreams!

Play recommended courses from the Super Mario Maker™ game on the Wii U™ console and take on that game's 100 Mario Challenge. Share courses with other players via the StreetPass™ feature and local wireless.

Super Mario Maker was an idea that came from looking back at how Mario levels were first created, then became a desire for players to make their own levels and test the bounds of their creativity. The Wii U did a perfect job of showing that, but now, with Super Mario Maker 3DS, the experience can grow to new levels! For now, you can take the game on the go and make levels no matter where you are! Or, play the levels from gamers around the world and test your skills! There are no limits to what you can do.