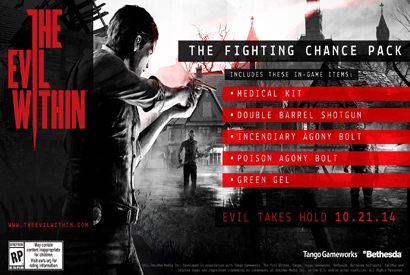 The Evil Within - The Fighting Chance Pack DLC

About The Evil Within - The Fighting Chance Pack DLC

Developed by Shinji Mikami -- creator of the seminal Resident Evil series -- and the talented team at Tango Gameworks, The Evil Within embodies the meaning of pure survival horror. Highly-crafted environments, horrifying anxiety, and an intricate story are combined to create an immersive world that will bring you to the height of tension. With limited resources at your disposal, you’ll fight for survival and experience profound fear in this perfect blend of horror and action.

While investigating the scene of a gruesome mass murder, Detective Sebastian Castellanos and his partners encounter a mysterious and powerful force. After seeing the slaughter of fellow officers, Sebastian is ambushed and knocked unconscious. When he awakens, he finds himself in a deranged world where hideous creatures wander among the dead.

Facing unimaginable terror, and fighting for survival, Sebastian embarks on a frightening journey to unravel what’s behind this evil force.

Shinji Mikami, the father of survival horror, is back to direct a chilling new game wrapped in haunting narrative. Tension and anxiety heighten dramatically as you explore the game’s tortured world.

Plus, increase your odds of survival even more with The Evil Within The Fighting Chance Pack. In it you'll not only an extra medical kit, you'll get Green Gel, which you can use to upgrade abilites, you'll get a double barrel shotgun and rounds for it, and an Incendiary Agony Bolt, which will light enemies on fire. So take your survival to the next level with The Evil Within The Fighting Chance Pack. Your survival may just depend on getting it, and how you use it in game.