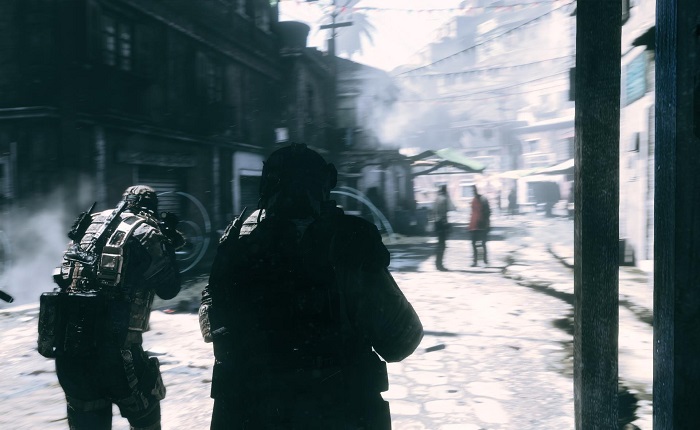 There is nothing fair, honorable, or just about combat. There is only winning and losing—the dead and the living. The Ghosts don’t worry about even odds. They do everything in their power to overwhelm and obliterate the enemy. Future technology is the key to winning an asymmetric battle.

In Ghost Recon Future Soldier join an elite team of highly trained, cut-throat special-ops soldiers. Armed to the teeth with unrivalled combat technology and cutting-edge military hardware, Ghost Recon takes you to the globe’s most deadly warzones to hunt down the highest value targets.

In Ghost Recon Future Soldier you will be equipped with the most advanced combat technology designed to overwhelm and obliterate the enemy.

Cross Com: Stay one step ahead of the enemy: Cross Com gives you real time intel projected directly on your goggles. The HUD allows you to control drones on the fly, as well as locate key enemy targets.

Optical Camouflage: Be invisible: Use optical camouflage to move undetected through hot spots and gain the upper hand on your enemies.

Sync Shot: Tag ‘em and bag ‘em: Use the tagging feature on the ground or by drone to coordinate synchronized attacks on enemy targets.

Plus, use the environment to your advantage via the Cover Swap system. Now, you'll be able to use a variety of covers to make sure you're both never caught in the enemies line of sight, while also setting up the perfect shot to take them down.

Prefer a more "personal" approach? Future Solider will let you go toe-to-toe with your foes in brutal hand-to-hand combat. So if you're fists need to do the talking? By all means.

The models of Tom Clancy's Ghost Recon: Future Soldier has been detailed and remade so that they have the best looks and animations possible. Watch as your soldier seamlessly does tasks that you once thought were impossible for a game character to replicate.

All this and more in Tom Clancy's Ghost Recon: Future Soldier.