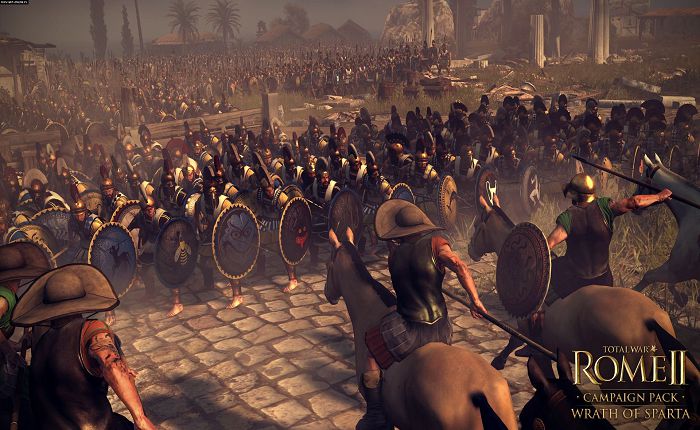 Collecting together a wealth of content from the ROME II opus, players will discover the best of the Ancient Greek and Roman worlds. Thousands of hours of challenging conquest await across a massive main game, two epic campaign expansions and dramatic extra content that introduces additional playable factions and ferocious elite warriors.

Total War: ROME II
The award-winning Total War series returns to Rome, setting a brand new benchmark for strategy gaming. Become the world’s first superpower and command the Ancient world’s most incredible war machine. Dominate your enemies by military, economic and political means. Your ascension will bring both admiration and jealousy, even from your closest allies.

Imperator Augustus - Campaign Pack
Set in 42 BC during the chaotic aftermath of Julius Caesar’s grisly murder, the Imperator Augustus Campaign Pack puts players at the outbreak of one of the bloodiest civil wars ever fought. The republic remains whole, but its soul is divided as three great men, the members of the Second Triumvirate, hold the future of Rome in the palms of their hands.

A massive expansion, which rivals the original ROME II Grand Campaign in both scope and scale.

Wrath of Sparta - Campaign Pack
The year is 432 BC, and unrest grows throughout the Greek City-States. At a gathering of the Peloponnesian League, prosperous Athens has earned the enmity of Sparta, Korinthos and the Boiotian League, tipping the delicate political balance past the point of no return.
The future of Greece itself is at stake, and the ensuing conflict will result in nothing less than supremacy of the Hellenic world.

The earliest time period ever featured in a Total War game, the iconic Peloponnesian Wars provide a formidable backdrop to an action-packed expansion.

The Greek States share a number of common goals, philosophies and general diplomatic aims. However, they are defined by their fierce independence and between them demonstrate a huge variety in approach to civil and military challenges that often brings them into conflict with the wider world, and each other.

Daughters of Mars - Unit Pack
Athena, Bellona, Andraste, Mars: whichever war deity these soldiers pledged their lives to received a solemn promise of victory in the face of even the most formidable enemies. Whether in defence of their homelands, or called upon to fulfil their part in glorious conquest, female combat units featured throughout the ancient world.

With 7 new elite units, Daughters of Mars adds a swift and deadly mix of fighting styles and abilities to the fray. Generals will wisely place value on those who aspire to be the avatar of the war gods themselves!