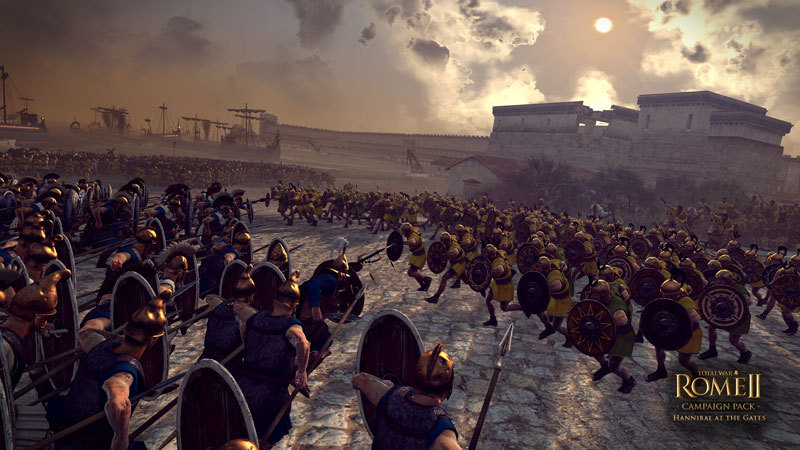 
ABOUT THE GAME Dropping you into the Western Mediterranean at the outbreak of the 2nd Punic War, Hannibal at the Gates features a new campaign map focused on the period that brought the ancient-world superpowers of Rome and Carthage to all-out war.

New Campaign Map:
A more detailed representation of the western Mediterranean than the ROME II map, with players able to expand across 19 provinces dotted with resources and settlements. The major powers of the time, Rome and Carthage, begin at loggerheads but with a number of key regions and client states under their control. Syracuse, the Arevaci and the Lusitani all start with a single region, offering a significantly different and more formidable challenge than playing as one of the two great empires.

12 Turns per-year
With a time period covering events between 218 - 202BC, each turn in Hannibal at the Gates represents a month, and the campaign transitions through all four seasons of the year, complete with seasonal gameplay effects.

New Playable Factions for Total War: ROME II
In addition to mighty Carthage and Rome, players can fight the 2nd Punic War as three new factions: the Arevaci, the Lusitani and Syracuse, each one featuring its own faction traits, characteristics, unique units and campaign start-position. If Hannibal at the Gates is owned, these factions are also playable in the ROME II Grand Campaign.