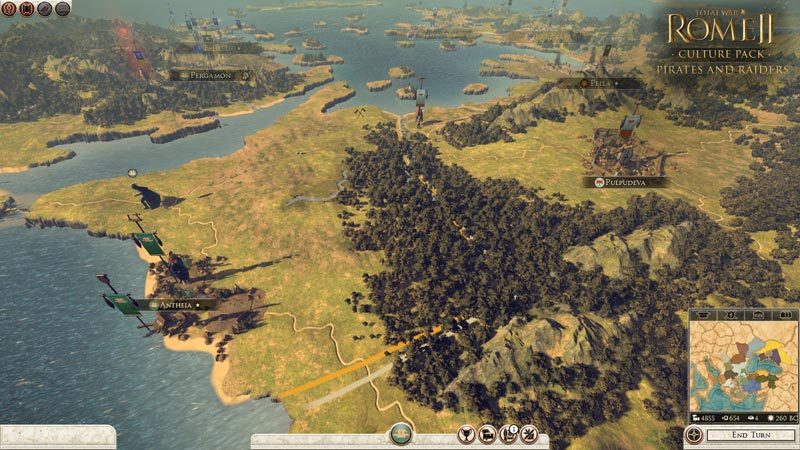 Players can now plunder the campaign map as the Ardiaei of Illyria, and the Thracian tribes of Tylis and the Odrysian Kingdom. With their own rosters of military and naval units, distinct traits and play styles, these Balkan factions offer a new and unique way to experience the Grand Campaign in ROME II.


KEY FEATURES New Balkan cultural traits ﾡﾰ Tylis, the Ardiaei and the Odrysian Kingdom are all adept raiders, snatching wealth from under the noses of the other factions, and fight with great conviction in enemy territory. So warlike are these tribes, their populations are actually happier when at war with their neighbours.

New faction traits ﾡﾰ Each of the Balkan factions has its own starting position on the campaign map and its own set of faction traits, making a unique Grand Campaign experience. All are accomplished brigands; in addition, The Illyrians of the Ardiaei favour piracy, the Thracians of the Odrysian Kingdom are excellent archers, while the people of Tylis, heirs to the Celtic migrations into Asia Minor, train their new melee infantry recruits to a high standard.

New religion ﾡﾰ The Ardiaei and Odrysian Kingdom both feature their own unique religious building chains, which bring numerous benefits and effects to their campaign gameplay.

New technologies ﾡﾰ The Ardiaei and Odrysian Kingdom both feature their own unique technologies, which enable the player to unlock key new units and effects which replace parts of the core Barbarian culture technology trees.

New units ﾡﾰ Sharing much with their Celtic forbears, the factions of the Balkan culture principally employ the core Barbarian unit-roster, with the following new units available for each faction:

New Mercenaries ﾡﾰ The soldiers of the raiding nations know well the value of coin and will ply their fearsome skills at the behest of others. When playing as another faction, the following mercenaries and auxiliaries will be available to you when recruiting from within the indicated territory: