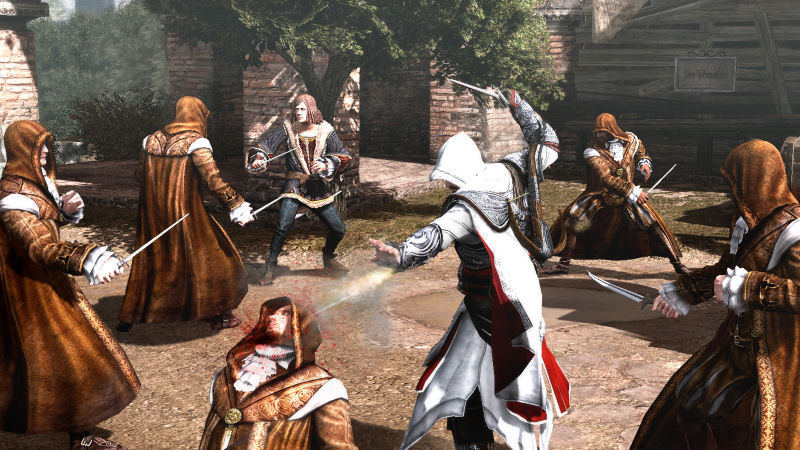 - The Officer - Death's Finest Ally: Few have seen him. Even fewer have lived to tell about it. Fear is his friend, and Death is his ally.
- The Harlequin - The Walking Nightmare: Behind the gaudy costume and twisted smile lies the soul of a merciless Assassin.

- Fashioned by the Helmschmied Armory in 1489, only a few sets were completed due to the weight of the metal. Very few men proved strong enough to wear it.

- Take a closer look at the history of the Assassins and art of Assassin?s Creed Brotherhood.

- A set of trading cards featuring all the characters of Assassin's Creed Brotherhood Multiplayer, including their kill moves and biographies.


- Explore the events that revolve around Ezio?s father, Giovanni Auditore da Firenze, and gain insight on the Assassin?s Creed story and universe.

- Go behind the scenes with the development team to learn about how the game was made and Ezio?s continuing story.

- 22 songs from the original game soundtrack by Jesper Kyd.

ABOUT THE GAME Live and breathe as Ezio, a legendary Master Assassin, in his enduring struggle against the powerful Templar Order. He must journey into Italy?s greatest city, Rome, center of power, greed and corruption to strike at the heart of the enemy.

Defeating the corrupt tyrants entrenched there will require not only strength, but leadership, as Ezio commands an entire Brotherhood who will rally to his side. Only by working together can the Assassins defeat their mortal enemies.

And for the first time, introducing a never-before-seen multiplayer layer that allows you to choose from a wide range of unique characters, each with their own signature weapons and assassination techniques, and match your skills against other players from around the world.

It?s time to join the Brotherhood.

* This product does not support Windows? 98/ME/2000/NT
** Supported Video Cards at Time of Release: