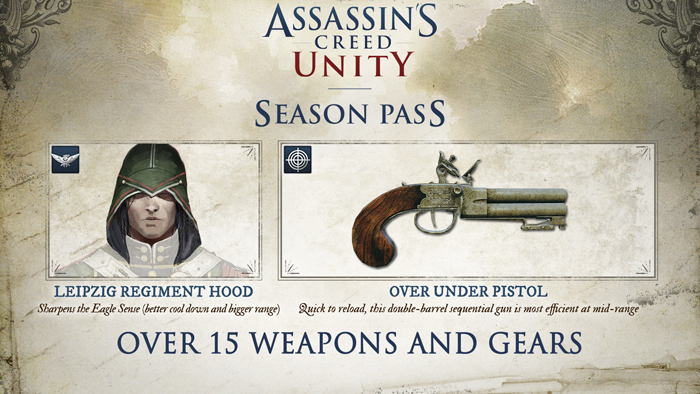 Experience everything Assassin’s Creed Unity has to offer with the Season Pass. With 8 hours of new content including a new campaign in a rural city outside Paris, more missions and gear in Paris, and an all-new downloadable game set in 16th Century China, and much more.

KEY FEATURES
NEW CAMPAIGN – DEAD KINGS
Follow Arno, after the events of Assassin’s Creed Unity, to the ominous rural city of Saint Denis. Explore the troubling city’s extensive underground universe - an ancient necropolis with an intricate network of catacombs and deep caves that hide the best-kept secrets of the deceased French kings. Use Arno’s new lantern to advance in the dark, fend off animals, and solve ancestral puzzles; or put out the lantern to explore the catacombs in the dark.

Battle the Raiders, an aggressive and secretive faction desecrating the catacombs of Saint Denis for mysterious reasons. To combat these powerful new foes, Arno will add the Guillotine Gun to his arsenal – a powerful weapon that allows him to unleash both long-range explosives and close-combat havoc. Once obtained, the Guillotine Gun can be used in the main Assassin’s Creed Unity game, including co-op missions.

EXPAND YOUR EXPERIENCE IN PARIS
Upgrade your Master Assassin and equip more than 30 new items including weapons, gear, and outfits. Whatever your play style, you will be able to build the perfect load-out to achieve your objectives. Content carries over from Assassin’s Creed Unity to Assassin’s Creed Unity Dead Kings, and back.

NEW DOWNLOADABLE GAME - ASSASSIN’S CREED CHRONICLES: CHINA
China,1526. Shao Jun, the last remaining Assassin of the Chinese Brotherhood has returned to her homeland with a vendetta. Newly trained by the legendary Ezio Auditore, she is hell-bent to exact vengeance and restore her fallen brotherhood.

Assassin’s Creed Chronicles: China is a 2.5D reimagining of the celebrated franchise. Experience parkour on the Great Wall, use martial arts and new weapons to kill from the shadows, and take the Leap of Faith in a vibrant setting designed for digital download.