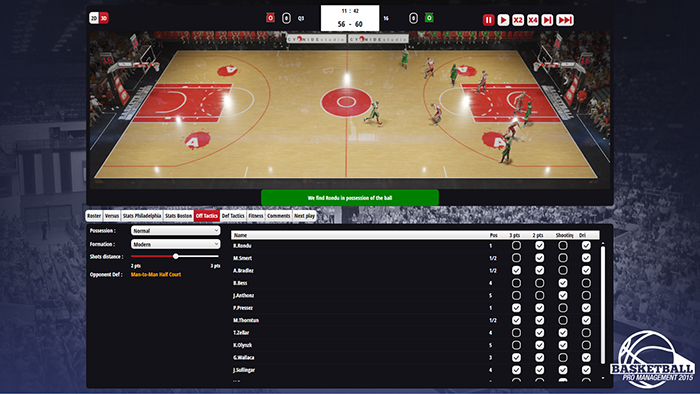 In Basketball Pro Management 2015 you will take control of your own basketball team! It's your job to take it to the top of the rankings by managing a wide variety of parameters including the composition of your starting five, training, transfers, objectives and, of course, finances!

Many tactical choices that affect each game are possible, with detail that will please the shrewdest of tacticians. You can even create your own game systems, and for the novice coaches, be able to let your playmaker decide on part of the tactics to be adopted, will also be at ease.

You can replay the games in 2D or in 3D to refine your strategy during and after the games. Thanks to the database editor, players are even allowed to custom their game and add new players.

Now in its fourth year, Basketball Pro Management 2015 introduces numerous features and improvements. Among these upgrades, managers this year can look forward to more challenging and tactically-minded AI opponents, enhanced recruiting, and a refreshed league-satisfaction system.

In addition to rankings and budgets, an effective manager has to plan for the growth of individual players and the team's performance. Recruiting has been redesigned to offer significantly more depth through the addition of league-specific regulations, including leagues from North America, China, Turkey, and many more worldwide.

Running a successful team takes more than good coaching skills. Team-rank, performance against rivals, and a wide variety of other parameters all affect the support you receive from fans and owners, and in turn, the income from tickets and stadium shops. Manage your goals wisely. After all, the most competitive players don't come cheap.