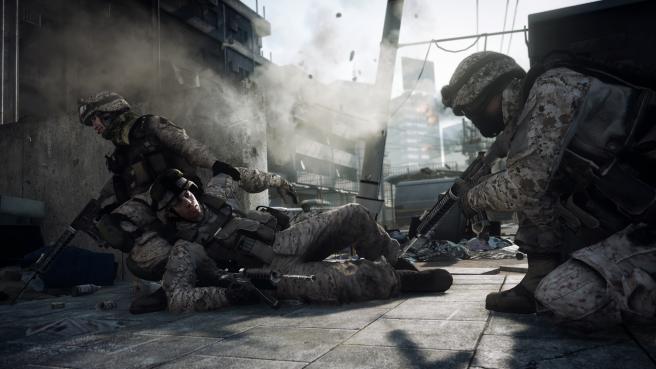 What’s your weapon of choice?
The Battlefield name means ‘action’ to millions of players worldwide, and Battlefield 3 just ramps up the intensity. How? It’s all about choice.

The sheer number of options available to you on the field of combat is astounding. The four player classes—Assault, Engineer, Support and Recon—each have their specialties, and learning how these work with each other is the key to victory. Like taking the heat? Play Assault, and revive your fallen teammates on the front line. Prefer the distance of a sniper? Take the long view as Recon and neutralize the enemy threat before it appears. However you like to play, there’s something here for you.

Combat on the field of battle is more hectic and visceral than ever, and that’s in large part thanks to the incredible sound design. Near-misses whine by your head, provoking an immediate panic response; the rising drones of approaching aircraft keep you mobile; and the never-ending chatter of gunfire reminds you that you’re in constant jeopardy.

Fortunately, the controls feel as tight and responsive and familiar as you’d expect. It’s nice to know you can rely on them in the face of everything around you falling to chaos. Adding to the fun is your ability to commandeer any vehicle you come across, from tanks and buggies to helicopters and jets. Slam your F/A-18E Super Hornet directly into an enemy combatant! Why not? In this game it’s fun to do whatever you want, just because you can. DICE understands this, and it’s why players keep coming back.

But the further incentive for continued play is in the tons of unlocks: Ranks, Ribbons, Medals and the ongoing leveling that results in specializations that enhance your prowess. Stick with your helicopter, for example, and unlock IR flares that ward off oncoming missiles, or increase your stealth capabilities. Or equip a flak vest to reduce splash damage from explosives. Or any of scores of other options. There’s an embarrassment of riches on offer, and every second of play puts you closer to unlocking more. Build up to the loadout of your dreams to annihilate your opponents with extreme prejudice.

Really, though, it’s all about the multiplayer maps. Battlefield 3 has your back with nine maps that offer all the challenge you can handle. Choke points with plenty of destructible cover? Check. Wide open spaces for crazy vehicular combat? Roger that. Multi-level urban environments on a Ranked server with your squad’s reputation on the line? Affirmative. The only thing between triumph and total destruction is you, and that’s just the way you like it.