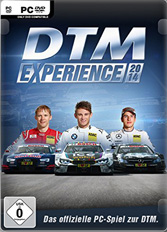 nter the world of a professional DTM driver and experience the 2014 DTM Championship season in the most authentic simulation to date.

Purchase DTM Experience 2014 and race all 23 cars and 9 tracks from the 2014 season. Choose from world leading manufacturers and take the wheel of the Audi RS 5 DTM, BMW M4 DTM or DTM Mercedes AMG C-Coupé and collect points in pursuit of the 2014 DTM Championship title.

Plan your race strategy and make pit stops for fresh tyres and repairs in Single Race and Championship game modes. Use your car’s DRS system and trade down force for an extra boost of speed during crucial overtakes to leave your opponents eating dust.

Ten races stand between you and becoming a DTM champion, enjoy the drive.

R3E user accounts are associated with the user’s Steam account for security and transactions through Steam Wallet. A Steam account can use multiple R3E accounts by using the ‘switch accounts’ function in the R3E Account Settings.