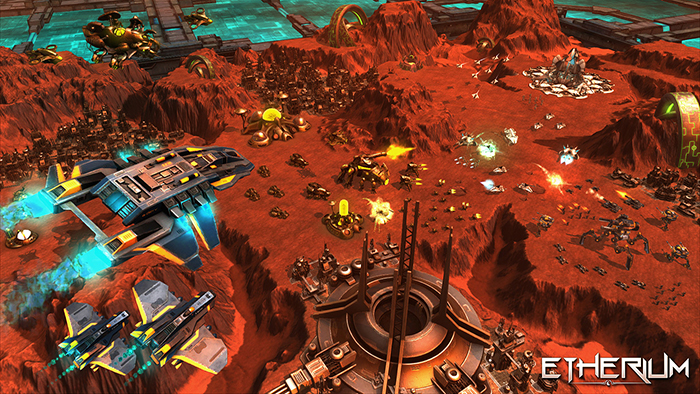 Etheriumis a real-time strategy game set in a science-fiction universe, where three factions battle it out for a mysterious and rare resource known as ‘Etherium’.

Manage your resources, develop your base, and take command of infantry, tanks, aircraft, and gigantic colossi of war to battle not only your foes, but weather anomalies and mysterious secondary factions in richly strategic and original RTS gameplay. In a dynamic, fully-fleshed out single player campaign, develop your technological capabilities and expand your colonies over the furthest sectors of space, assembling a formidable armada.

Each of the three factions have their own strengths and weaknesses, as well as different tactical command skills such as map exposure, climate control, or planetary bombardment. Define your own strategy, deciding to either fell your enemy by striking their mother-ship from the planet's surface, or rapidly crushing their colonies. In multiplayer, team up or wage battle in all-out deathmatcheswith up to 4 players!