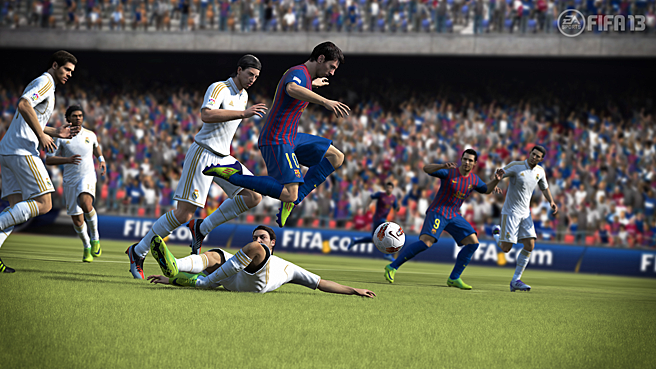 Five game-changing innovations revolutionize artificial intelligence, dribbling, ball control and physical play to create a true battle for possession across the entire pitch, deliver freedom and creativity in attack, and capture all the drama and unpredictability of real-world football.

All-new Attacking Intelligence infuses players with the most sophisticated artificial intelligence ever achieved. Players have the ability to analyse space, work harder and smarter to break down the defence, and think two plays ahead. Now every touch matters with the most comprehensive and intuitive dribbling system ever developed for the franchise. Inspired by the world’s best player, Lionel Messi, Complete Dribbling enables players to face their opponent and use precise dribble touches combined with true 360° mobility with the ball while threatening to attack, so it’s easier to be more creative and dangerous in 1v1 opportunities. FIFA 13 1st Touch Control transforms the way players control the ball, eliminating near-perfect touch for every player on the pitch, and creating more opportunities for defenders to win back possession. The second generation of the Player Impact Engine expands physical play from just collisions to off-the-ball battles between players. Defenders can push and pull for position, and utilise their size and strength to force opponents into poor touches and decisions before the ball arrives. FIFA 13 Tactical Free Kicks provides the tools to create dangerous and unpredictable free kicks. Position up to three players over the ball and utilise dummy runs and more passing options to outwit your opponent.

FIFA 13 delivers the largest and deepest set of game-changing features in the history of the franchise. Additional features and new modes will be revealed in the months ahead.

• Attacking Intelligence — All-new positioning intelligence infuses attacking players with the ability to analyse plays, and to better position themselves to create new attacking opportunities. Players will work harder and smarter to break down defences, make runs that pull defenders out of position, and open passing channels for teammates. Plus, players possess an off-the-ball vision and the ability to think two plays ahead to create, curve, or alter runs to capitalize on openings as they occur.

• Complete Dribbling — Make every touch matter with complete control of the ball. Exploit 1v1 opportunities with the freedom to be more creative in attack. Players are more explosive accelerating with the ball, and utilise precise dribble touches with true 360° mobility with the ball while facing a defender. Face an opponent to threaten attack while moving with the ball in any direction to dodge tackles, or turn and shield the ball, maintaining position, and holding off defenders for longer stretches.

• FIFA 13 1st Touch Control — A new system eliminates near-perfect control for every player by creating uncertainty when receiving difficult balls. Poor passes are harder to control, enabling defenders to capitalize on errant balls and poor touches. Factors such as defensive pressure, trajectory of the ball, and velocity of the pass all factor into a player’s success. Players with better control and skill stand out. Fewer perfect touches, the potential to over hit passes, more opportunity for loose balls, and greater balance between defending and attacking.

• Player Impact Engine — The second generation of the award-winning physics engine expands physical play from just collisions to off-the-ball battles, giving defenders more tools to win back possession. Defenders can use their body to win possession, push and pull for position, and utilise their size and strength to force opponents into poor touches and decisions before the ball arrives.

• New Passes — Two new passing options give players the ability to finesse passes over the outstretched leg of a defender or play lower trajectory lofted through balls into space or to teammates.

• Complete Authenticity — Over 500 officially licensed clubs and more than 15,000 players.

• FIFA 13 Tactical Free Kicks — Create dangerous and unpredictable free kicks. Position up to three attacking players over the ball and confuse opponents with dummy runs, more passing options, and more elaborate free kicks. Opponents can counter by adding or subtracting players to the wall, creeping the wall forward, or sending a bullet man to intercept the pass or block the shot.

• FIFA 13 Fundamentals — Essential elements have been refined to make the experience more authentic. Referees will now make better decisions awarding fouls and cards, goalkeeper intelligence has been improved, and Tactical Defending has added lateral mobility for players in defensive containment. Plus, new animations have been developed for off-balance shots, 180° shots, and celebrations.