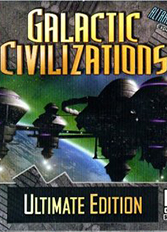 Galactic Civilizations is a space based strategy game in which you are in control of humanity's destiny.

The year is 2178, the Terran Alliance has invented a new technology -- Hyperdrive. But the secret has leaked to the other civilizations starting a race for all the inhabitable worlds in the galaxy! As leader of United Earth, you must research new technologies, build an economy, create a powerful military force, all the while carefully balancing your political, diplomatic and trade skills.