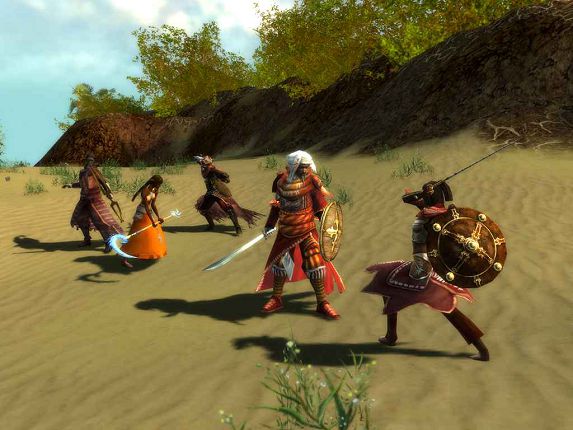 Enter the ever-changing fantasy world of Tyria, where you control the story and your actions shape the world around you! Guild Wars 2 provides a massive persistent online world and, just like the predecessor Guild Wars. With action-oriented combat, deep personal storylines, epic dynamic events, world-class PvP, and no subscription fees, Guild Wars 2 defines the future of online roleplaying games.

Guild Wars 2 have the kind of extensive character advancement appropriate to a persistent-world RPG.

Players have the freedom to play together even if their friends are at a much higher (or lower) level.
Players are able to engage in organized, balanced PvP (similar to GvG in the original Guild Wars) without first leveling up characters, finding equipment, and unlocking skills. While inside the organized PvP area, all characters will be the same power level and will have access to the same equipment.

In addition to humans, players can create, customize, and play a variety of non-human races. For example, play as a warmongering Charr, towering Norn, small-sized Asura or plant-like Sylvari.