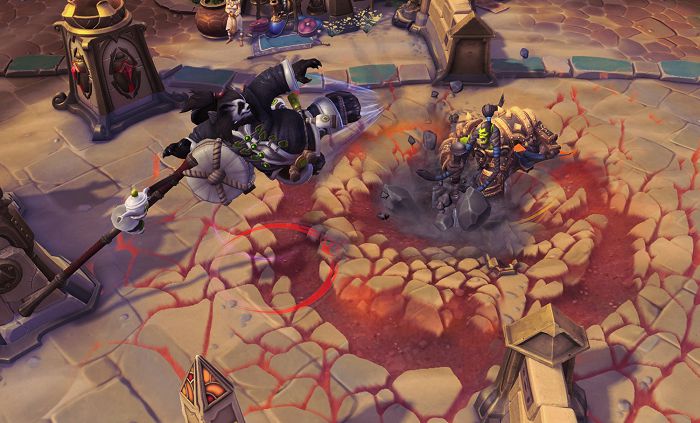 Heroes of the Storm Zagara (PC)

Heroes of the Storm is a raucous online team brawler starring your favourite Blizzard characters. Build and customize heroes from across every Blizzard universe to suit your play style. Team up with your friends and engage in fast-paced mayhem across varied battlegrounds that impact strategy and change the way you play the game.

Heroes represents more than 20 years of Blizzard gaming history, settings, and iconic characters, all mashed up into an epic, off-the-wall team brawler. Fight out classic showdowns such as Tyrael vs. Diablo and Arthas vs. Uther, or settle those late-night debates you've had about who's the stronger leader—Raynor or Thrall? Could Zeratul take down Illidan in a fight? Who's more badass... Kerrigan or the Demon Hunter from Diablo III? The combinations of Blizzard heroes and universes are endless.

Heroes of the Storm concentrates the intense battles and back-and-forth gameplay of online brawlers into fun, quick, action-packed matches. Though you can knock out a few games pretty rapidly, you may find yourself constantly wanting to jump into “just one more” game.

Heroes features approachable team-based play without sacrificing depth or variety. Whether it's joining with allies in a group fight, or working together to overcome each battleground's unique challenges, you're rewarded for playing as a team. And the hero roles run the gamut from stone-cold death-dealers, to town-razing specialists, to pure healers—each capable of making distinct, valuable contributions to their team's war effort. The game even includes some very specialized heroes, like Abathur, who offsets his lack of head-to-head impact with special abilities that affect the entire battleground.