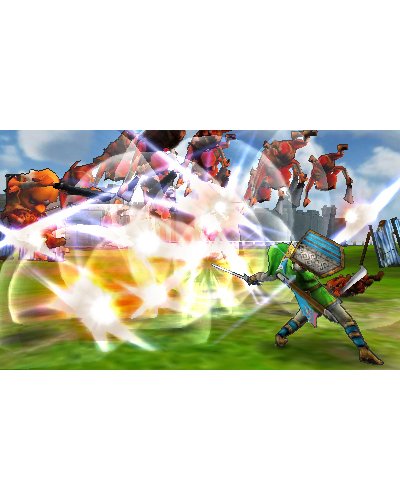 Cut down entire legions of enemies as fan-favorite Legend of Zelda™ characters using powerful moves as Hyrule Warriors comes to the Nintendo 3DS™ system. Control multiple characters to enhance your strategies and enjoy new story elements with playable characters from The Legend of Zelda™: The Wind Waker, such as Tetra, King Daphnes, and more.

War rages as the delicate balance of the Triforce is disrupted. The kingdom of Hyrule is once again being torn apart by a dark power, this time lead by Sorceress Cia. Now it's up to the legendary hero Link™ to face hordes of enemies and find the missing Princess Zelda™. Advance the story to unlock new playable characters, each with unique moves and weapon types. Collect Rupees and other useful items to upgrade weapons and craft badges, which you can use to bolster each warrior's abilities.

Contains content from the original Hyrule Warriors™ game, released on the Wii U console. New characters and story elements based on The Legend of Zelda™: The Wind Waker. New character-switching feature lets you change and command characters on the fly. Play as fan-favorite characters like Tetra and the King Daphnes for the first time in the series! Battle the fiercest Legend of Zelda™ enemies across Hyrule's most famous locales.

The Legend of Zelda has always been very realistic in many regards, especially when it came to the powers of the beings in the game. But with Hyrule Warriors Legends, you don't have that restriction anymore! Wield powerful items from the various characters and destroy hundreds of enemies, and then thousands of them! Whether as Link, Zelda, Sheik, Ruto, Midna, Fi, King of Red Lions, Skull Kid, you'll have an arsenal unlike any game before, and be able to use it to crush your enemies in style.

So check out Hyrule Warriors Legends, and see just what people are raving about.