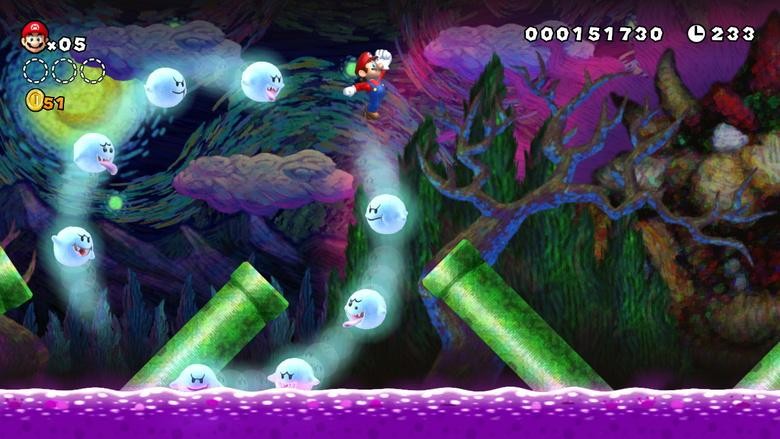 In New Super Mario Bros. U, Mario, Luigi and Toad are joined by a new character – you! Play as your Mii character to run, leap and stomp through a 2D side-scrolling Mario adventure. Explore a giant world map full of brand new courses, and experience ways to play that are only possible on Wii U.

Transform into Flying Squirrel Mario to swoop through stages and cling to walls, or hold onto Balloon Baby Yoshi to float gracefully through the air. Different coloured Yoshis and new power-ups offer fresh ways to play and experience the Mushroom Kingdom, while some old favourites are sure to return!

In New Super Luigi U, Mario’s out of the picture – it’s Luigi’s time to shine! Take on 82 all-new courses using Luigi’s unique actions like a higher jump and greater momentum, but with only 100 seconds on the clock for each course you’ll have to hot-foot it to reach the Goal Pole in time! Jump into multiplayer with friends and family, where Nabbit is playable for the first time – while this cheeky character can’t use power-ups, he also doesn’t take any damage if he bumps into enemies, so he’s an ideal character for anyone who finds action games tricky.