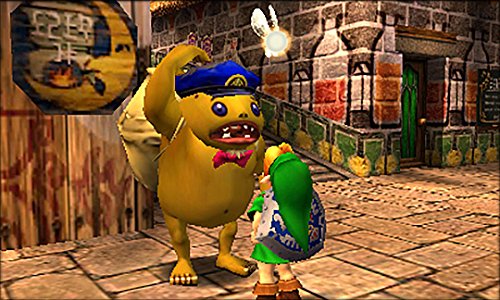 Head to the countryside to start a rewarding new life in Story of Seasons. Build a successful farm, make friends with the townsfolk and get involved in various events – there’s plenty to entertain experienced farmers, as well as those who are a little green!

In three days, the moon will fall and the land of Termina will meet with a terrible fate. Can you save it in time? Relive the world’s final 72 hours, solve elaborate puzzles, conquer dungeons, battle giant bosses, and befriend the doomed people of Termina in one of Nintendo’s most suspenseful apocalyptic adventures ever.

The Legend of Zelda: Majora’s Mask 3D is a remastered and enhanced version of the Nintendo classic that’s unlike any other Legend of Zelda adventure. In this shadowy tale, a masked Skull Kid drags Link into the world of Termina, where the moon is falling from the sky. Lucky for Termina, Link can reverse time and relive his last 72 hours in limitless ways. Each time, he’ll don any of his 20+ masks, help different citizens, battle different bosses, and ultimately change the fate of a world. This is the definitive version of a dark classic.

An ancient evil has doomed the world of Termina. Can you save it in just three days? Together, the land of Termina and its citizens form one massive puzzle for Link to solve. 20+ powerful masks make this one of the most varied Legend of Zelda™ games ever

The sequel to Ocarina of Time had big shoes to fill, and not a lot of time to be made, but what the Legend of Zelda team did with Majora's Mask was nothing short of Legendary. Now, Majora's Mask 3D is able for you to relive in portable form!

You'll play as Link, but for the first time ever, Link can transform himself into different beings of the world! Be a Deku, be a Goron, be a Zora, or, get every mask in the game so you can become the iconic Fierce Deity.

The world of Termina may seem confined, but don't be fooled, the game is packed with content no matter which direction you travel in, and has secrets just waiting to be found. The Dawn of the Final Days are here, will you be able to save the land?