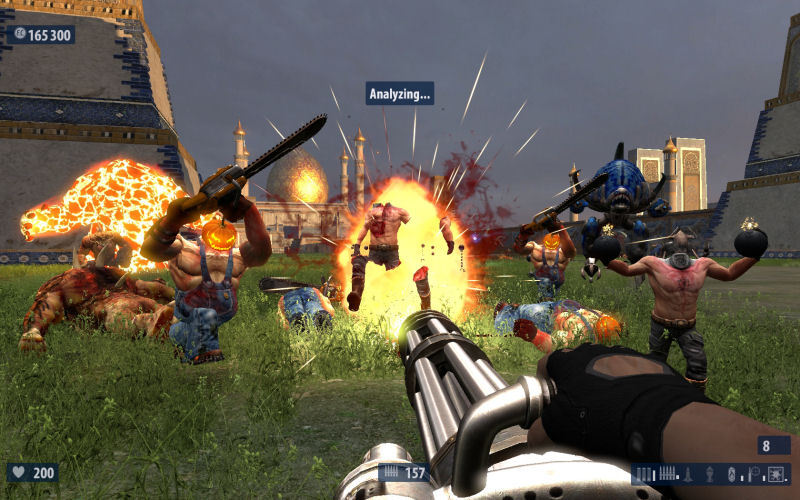 Featuring single-play, survival and cooperative play and mixed with brilliantly updated visuals, the game continues your battle against Mental?s army with the classic over-the-top action, crazy humor and horror from the golden age of first-person shooters.

Combined with intense versus and team modes for up to 16 players and in over 18 multiplayer maps, demo recording option, spectators and dedicated server support, Serious Sam HD: The Second Encounter is a worthy successor to the original masterpiece.

Various Environments and Secrets - Unleash mayhem on 3 different spectacular worlds: South America, ancient Mesopotamia and medieval Europe. Discover over 130 secrets including over 15 brand new ones hidden in the fray.

Unique Enemies and Bosses - Fight with 27 nightmarish warriors in Mental?s army, including old favorites from The First Encounter like Beheaded Kamikaze, Syrian Werebull and Kleer Skeleton. Go head to head against 5 new enemies and 3 new Bosses.

Special Weapons and Power-Ups - Wreak havoc with a huge arsenal of weapons including 3 new toys: the Sniper Rifle, Flamethrower and Chainsaw. Use Power-Ups to additionally increase your fighting and agility skills.

Co-Op Mode - Plunge into chaos with up to 16 players in campaign cooperative mode.

Deathmatch Mode - Watch all hell break loose in over 8 classic and brand new deathmatch maps with up to 16 players.

NEW! Survival Mode - Try to stay alive as long as you can against continued enemies? attacks in specially designed survival maps!

NEW! Co-Op Modes - Play even more along your friends in new co-op modes including Co-Op Survival.

NEW! Versus Modes - Fight against your friends in more versus modes including Beast Hunt and My Burden.

NEW! Team Modes - Compete against other teams in team matches including Team Deathmatch, Capture the Flag and Last Team Standing.